Quad bike rollover protection regulations, what you need to know

How does the OSH Act affect Agricultural Operations in America?

Take 5 for the over 55's when it comes to safety

Everyone ages, it’s no secret, even though we might not like to admit sometimes. There are a number of potential risks with ageing on farm and these tend to come in the form of three groupings: physical, social and mental wellbeing. Keep in mind these risks don’t mean life on the farm is over. Like any risk or hazard, it is about identifying them, then determining and implementing control measures to keep everyone safe.

Age affects everyone from reducing speed/reaction time, strength, balance, agility, eyesight, hearing and memory, then add into the mix a hazardous working environment farmers are faced with every day.

Why is the average age of farmers getting older?

These days younger workers have a different perception on farming and are choosing to take different career pathways. With this change in dynamics for farming families, it means an increase in pressure on the ageing population. With lower proportions of young family members learning the family business, the industry as a whole will be looking at skill shortages in the future.

How does this flow on and affect the agricultural industry?

The Department for Agriculture, Water and Environment in Australia notes that livestock farmers make up 47% of all Australian farmers, followed by crop farmers at 28% with mixed commodity farmers making up 16%.

“55 per cent of farmers and farm managers were owners of an enterprise and 26 per cent were contributing family members.”

With farmers staying on-farm longer, how do they manage health and safety?

We spoke with Nick Clarke to get a real life take. Ageing on farm is an important topic that needs to be talked about more often, we tend to learn from other people’s experiences. When we asked Nick why we should share our stories about ageing on farm, he notes that as ageing tends to go unnoticed from day-to-day, the real risk is that it can lead to the miscalculation. It is the assumption that “tasks performed last season can still be done this season, when in fact the accumulated deterioration has led to the task becoming exhausting and therefore less safe.”

If you stop and think for a moment, there are plenty of real-life examples. Think of manual handling. Picking up a load that last year didn’t seem quite so heavy or mounting and dismounting machinery, those steps seem just a bit further apart. Talking about ageing and its effects may increase awareness of what is practically possible and safe.

It isn’t just the physical changes that are noticeable, light and vision are also impacted. That text on the SDS that hasn’t changed, but you swear has gotten smaller. Nick says, “Yes I do (notice a difference), particularly physical tasks and in extremes of weather and light. As I get older, I notice the difference even to one year ago.”

Falls are one of the most common causes of injury for older farmers, just take a moment and think about the possibilities that surround you every day. There are motor bikes, quad bikes, trucks, hay bales, ladders, steps, livestock and so much more. It is better to prevent an injury that could lead to something more serious.

When we asked Nick is there was one moment that made him realise age was playing a factor and impacting how he operated his farm?

“Yes, one moment among many, particularly stands out. When assisting on a routine task that I have carried out almost daily, and usually alone, for 40 years. I was with a much younger person who carried out the work with ease, confidence, and speed. It shocked me to realize that was exactly how I used to do it, but no longer could.” 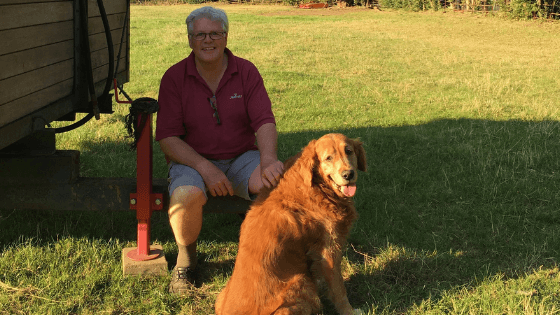 From 2013-2016 SafeWork Australia recorded workers aged over 65 years accounted for over a third of the 155 workers killed in the agricultural industry. The natural affects of growing older are intensified by the physical requirements that come with farming; manual labour, long hours, working in rural settings and often alone.

We asked Nick what his biggest concern were when working alone, “I am used to working alone and so I don’t have any more concerns due to age. I have more age-related concerns when working with others particularly younger people who understandably have no experience of declining faculties and may expect a similar level of performance to their own, this could jeopardize everyone's safety.”

The aim of this article was to get you thinking. We want you to stay on farm for as long as possible. There are so many benefits, not just for yourself, but for the community around you. There are a number of small changes you can implement today, that could keep you and your team safe for years to come.

When it came to adjusting his health and safety practices, Nick had a great tip:

“I try to think things through a lot more before I start a task. Unfortunately, this adds time to a job that is already going to take longer than it would have done when I was younger. I try to admit my age limitations (not easy) to prevent me from becoming frustrated.”

Together we can breakdown the barriers of ageing on farm. Nick’s final recommendations, “I think for the good and safety of future farming we need to encourage younger people into the industry and try to find a related role for the older farmers. This may be quite a challenge on smaller farms.”

“It would be great if there was a mentoring/job share type ethos to combine young, fit, enthusiasm, up to date technology and knowledge (but little money and experience) with older wisdom, experience and possibly money/investment. The 2 groups need to develop more respect for each other.”

How does the OSH Act affect Agricultural Operations in America?