When it comes to an emergency, not just in agriculture but in general, having the right training and knowledge for a quick first aid response can save lives. When the warmer seasons see a spike in temperature, it's important to educate your workers as part of their health and safety practices. Discuss what to do if anyone is bitten by a snake, where snake bites commonly occur and the importance of identifying deadly snakes.

The Royal Flying Doctors Service (RFDS) has estimated that there are around 3,000 snake bites in Australia every year. With recent figures recording 550 hospitalisations and two deaths due to snake bites each year.

According to both the RFDS and the Australian Snakebite Project, in attacks where the snake was positively identified, the brown snake was the most common biter (41%), followed by the tiger snake (17%) and red-bellied black snake (16%). Three-quarters of the people bitten by snakes are males aged in their 30s - a common demographic among Australian farmers.

Despite popular opinion that snake bites happen out in the bush, the RFDS recorded that 57% of snake bites actually occur near houses, not in the bush. Half of all bites occurred while people were out walking, with gardening and trying to catch a snake the most common other scenarios.

Snakes will often be close to farmhouses and buildings in search of water or mice. Maintaining a clean yard area including keeping water sources located in set areas, removing attractions for rodents and maintaining vegetation levels will help lessen the attractions for snakes. This type of yard maintenance also reduces fire fuel loads in peak fire seasons.

More than 90% of snakebites happen on the upper or lower limbs, so ensuring you have adequate personal protective equipment (PPE) can provide protection when the correct footwear, long pants and sleeves and gloves are used while working outside.

Adequate first aid training and knowledge of what to do in all emergencies, including a snake bite emergency, can be critical to survival and should form part of your farm safety policies and regular training refresher modules for staff. Staff should be well-informed of first aid kit locations and emergency contact details.

Surprisingly, the bites are often painless and may go unnoticed as there may only be light lacerations, scratches, or light bruising along with some bleeding or swelling. Common symptoms include an unexplained collapse, vomiting and abdominal pain, bleeding or paralysis.

Did you know there are two different types of snake bites?

Whilst dry bites can be painful, cause swelling and redness, the bite is self is “dry” as the snake does not release venom. Remember, you can’t always tell which type of snake bite a person has suffered so you should always seek medical attention.

As mentioned previously, a venomous bite is where the snake release venom containing poison into a wound. This poison is used to stun, numb or kill the victim. Venomous bites will also result in swelling and redness as well as nausea, blurred vision, irregular heartbeat, breathing difficult and a number of other symptoms.

It is essential to act quickly after a snake bite. Here are our top 6 do’s and don’ts if you are bitten by a snake:

Once initial first aid has been applied in any situation, medical attention should be sought immediately. When it comes to emergencies, empowered agricultural employees are safe employees. 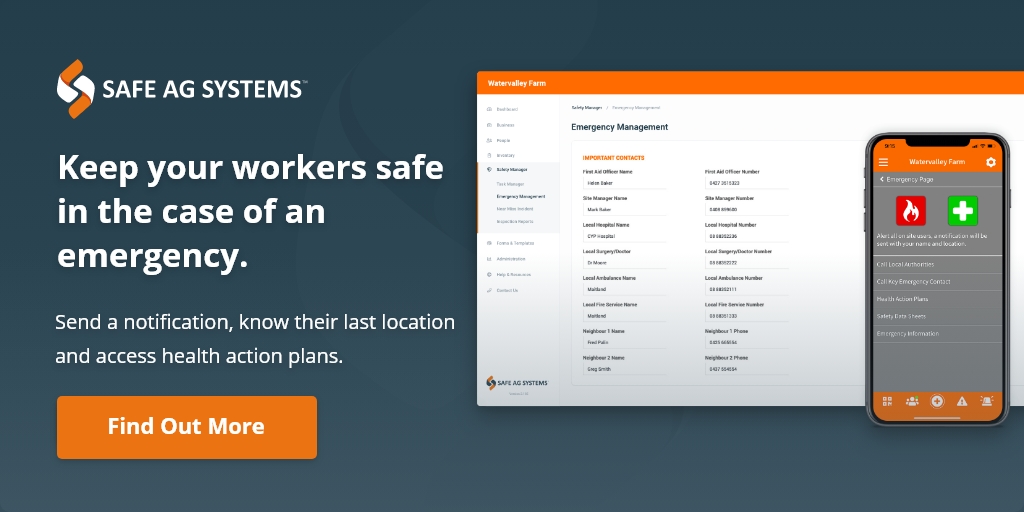 What the WHS Act Independent Review means for you