If you are viewing from the United States, discover our range of resources for National Farm Safety and Health Week.

The theme for 2022’s National Farm Safety Week is “Recipe for Averting Disaster”, this national event focused on Farm Safety is held the third week in July every year. From the 18th – 24th July the agricultural industry comes together to address a range of risks and hazards faced by Australian farmers.

This year Farmsafe Australia are bringing attention to a number of intangible risks and hazards such as fatigue, complacency, the blurred line between the home and work environment, labour shortages and the aging workforce, wellbeing and many other issues that combine to make Australian farms one of the most dangerous work environments.

Our team at Safe Ag Systems have pulled together some important facts and figures around farm safety. Find out what farming elements are most likely to cause you injury, or worse a fatality. What effects those incidents have on our industry as well as the people it directly impacts and some solutions and recommendations that you can implement on-farm. 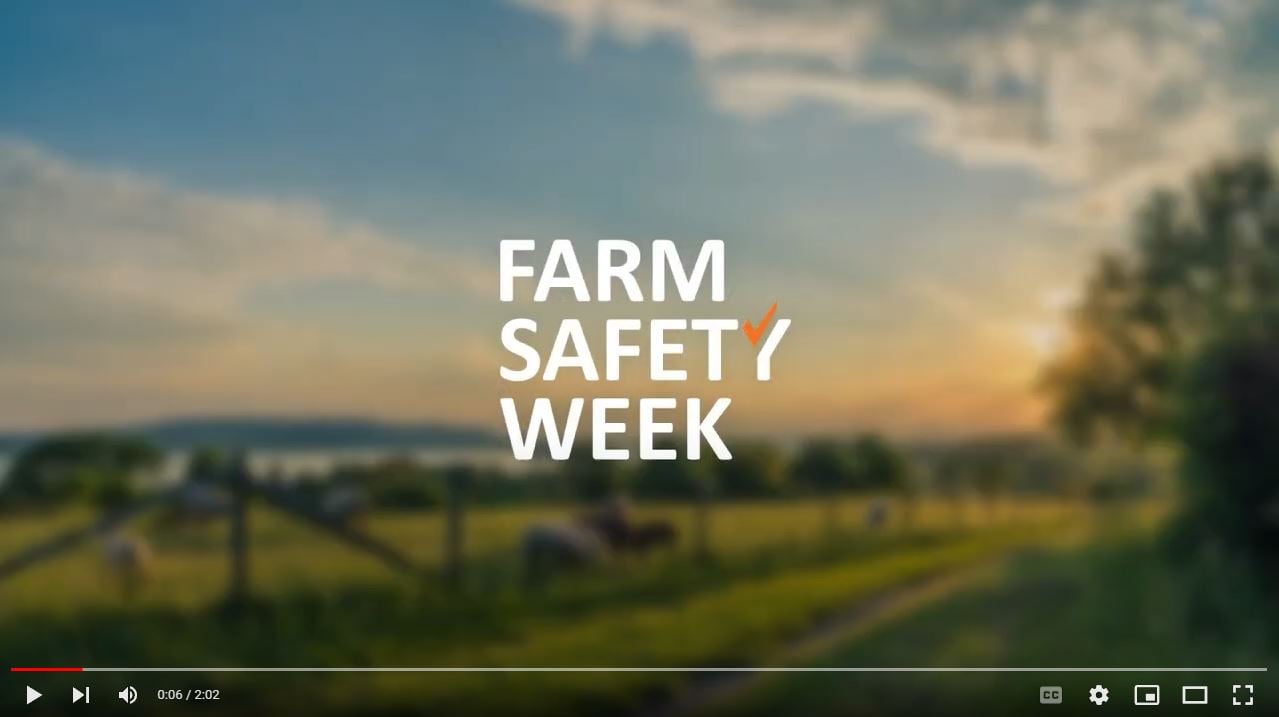 The state of our industry

There are several statistics we need to be paying attention to in the agricultural industry, however you may find it shocking to learn that there were 46 deaths on-farm in 2021. Whilst this is a decrease on the 2020 figure of 58 on-farm fatalities, we can always make Australian farms safer.

According to Safe Work Australia, Livestock farmers are at the most risk when it comes to a fatality at work. Livestock farmers accounted for 36% or 57 fatalities over a four-year period compared to crop farmers at 11% or 17 fatalities. However, the impact each incident or fatality has on local communities, businesses and family members is the same for every commodity.

As an industry with the highest number of fatalities and second highest fatality rate, 14.6 deaths per 100,000 workers, it’s scary to learn that approximately only 43% of farmers confirmed with Farmsafe Australia that they have health and safety policies and procedures documented for their farm. 23% of farmers admitted that their farm policies and procedures were only stored “in their head”.

More than industry statistics - How are we helping the industry?

Safe Ag Systems are advocates for Farm Safety, obviously, it’s what we live and breathe, but it is the daily conversations with local farmers and industry where we learn most about the unique challenges faced.

Whether it's a conversation at the local pub, a shared story about a neighbour’s workplace investigation or a fatality that has directly impacted a family member, there are so many unique circumstances that can provide the catalyst for change. The question is, do you act now, later or not at all?

Safe Ag Systems has been around for over 7 years to help and support change. A simple change to a process, a documented policy or access to a procedure can help shift the way we think about what we do and, improve the decisions we make.

Our team get to hear first-hand about the real struggle with organisational change, tech adoption and lack of available resources but we also get to listen to the many triumphs and successes being experienced by members of our Safe Ag Systems Community.

Our Ethos is to make change possible without having a significant impact on daily operations. Small decisions made on a daily basis contributes to sustaining and improving the agriculture industry – and everyone’s part of the change.

A variety of vehicles (tractors, quad bikes, Utes, trucks, etc.) are used in agriculture, we are becoming more reliant on new technology and innovation to tackle larger volumes of work. Whilst some of these innovations are pushing us towards autonomous vehicles, resulting in reduced labor costs and better precision, farm vehicles are still the greatest cause of fatalities.

In the Safe Work Australia industry snapshot vehicle incidents were accountable for the largest proportion of fatalities, 25% within the agriculture industry, followed by the rollover of non-road vehicles at 16%. In all commodities/sub-industries, except poultry farming and other crop growing, this trend continued with vehicle incidents being the main contributing factor to fatalities.

Whilst overall incidents involving vehicles has started to decrease overtime from 8,441 in 2018-19 and 6,506 in 2019 – 2020, time lost to these types of injuries is still an average of 7.2 weeks or a median cost of $15,600 in paid compensation. Serious claims that involved a vehicle resulted in injuries mainly to the upper or lower back and shoulders. The most common vehicles involved in fatalities between 2015 -2019 were tractors (23%, 40 fatalities) & quad bikes (14%, 25 fatalities).

Unfortunately, our industry is not short on examples when it comes to incidents involving vehicles:

You’ve heard it all before right, machinery is easily the most dangerous element on your farm, but when you see the statistics, it’s true. Between 2015 – 2019, there were 14 fatalities related to being trapped by moving machinery. Machinery and equipment make life easier, when used correctly. Farm machinery can produce serious crush injuries due to hydraulics, rapid movement from plant equipment could result in an unexpected impact and improper use of or missing guards are a danger. Of the total fatalities that occurred in agriculture, 9% were the result of being trapped by moving machinery and another 13% being hit by moving objects.

The number of injuries involving machinery and plant has increased from 2018-19 at 5,178 to 5,656 in 2019-20 with time lost reaching 6 weeks on average. Did you know the median cost of paid compensation has also increased over the years to $14,800? Safe Work Australia included cutting, slicing, sawing or crushing, pressing, rolling machinery, furnaces, conveyors and lifting plant, as well as electrical installation when calculating their number of serious claims relating to machinery and fixed plant.

Over the past few years, there have been a number of incidents that have involved machinery and equipment:

Every year slips, trips and falls cause thousands of injuries across Australia. Whilst one of the most common incidents in the workplace, in agriculture it can turn deadly. Slips, trips, and falls can be a result of poor footwear, wet or greasy floors, improper mounting/dismounting, uneven edges, cords and cables, loose mats, the list goes on. For agricultural workers, slips, trips, and falls pose a high risk due to the number of surfaces they may encounter on a regular basis. According to Safe Work Australia, falls from a height equated to 9% of all agricultural worker fatalities with sheep, beef cattle and grain farming to be the most affected.

The average number of slips, trips and falls resulting in compensation claims across Australia has been steadily overtime, reaching 26,100 in 2018-19. Falls on the same level (17,256) were the most common injury when compared to falls from a height (6,764). Knees and ankles were also the highest number of claims, followed by back and shoulders. Time lost to this type of injury was an average of 7.8 weeks or a median cost of $14,900 in paid compensation.

Whilst not directly reflected in Safe Work Australia’s Farm Safety statistics, we know that mental and physical wellbeing play a huge role when it comes to dealing with risks and hazard on-farm. Farmers over the age of 65 equated to 36% of all worker fatalities, compared to the closest age group which was farmers aged 55 – 64 accounting for 21% of fatalities. However, it should be noted that younger workers recorded the highest serious claim frequency rates.

We know those located in our rural communities face unique stress factors due to their work as well as access to support and resources when located outside of our major cities. In 2019-20 mental stress accounted for 6% of claims by males, but 13% of claims by females. In 2018-19, Mental stress resulted in 9,894 claims with Safe Work Australia and has only been increasing year on year. For all serious claims, mental stress involved the longest median time lost at 27 weeks in 2018-19, costing a median of $46,400.

Since COVID-19 farming communities are still feeling the impact physically, economically, and mentally. Facing uncertainty has become a part of the job description for Australian farmers, having faced droughts, bushfires, trade wars, and now a global crisis.

With a lack of skilled and experienced workers to assist with harvest and pack produce, this poses a risk to the health and safety of workers that form part of the supply chain. These safety risks can come in the form of inexperience and lack of training, as well as fatigue.

Fatigue can become a contributing factor due to a number of reasons; stress can impact a person’s ability to get a good sleep whilst increased workloads and longer shifts, possibly impacted by rostering and overtime, could lead to a burnt-out workforce.

If you're after more Farm Safety Week content, checkout our previous years below:

Disclaimer: Content on this website may be of relevance to users outside of Australia, but content links and examples are specific to Australia. Please check with your local authority for your country and industry requirements

See our induction signs and inventory labels for sale!